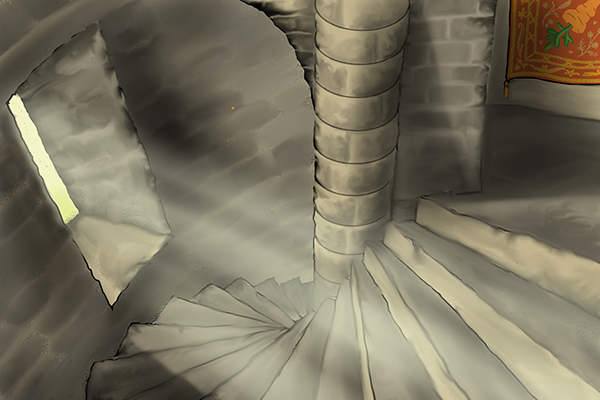 There are many staircases in the castle.  Some are rickety wooden structures, mere centuries old.  Some seem to be early attempts at pictorial definitions of words like ‘decrepit’ and ’creaking’ (although time has mellowed these definitions against their real-life counterparts).  The staircase up which the young man bounds, three-at-a-time, is neither decrepit nor creaking despite being older by nearly a millennia than any other staircase here.  This is not a ‘temporary’ staircase, added for convenience.  These stairs embody the primal solidity of the fortress; they were carved from the living rock of the mountain.

From the young man’s actions we can conclude that he is athletic, confident and more than a little foolhardy: the stair case was old even before the castle was built and the treads are deeply and unevenly worn.  Once this staircase was open to the elements and here and there the scarifying lacerations of the wind and rain, the subtle fingers of ice finding their way into the cracks, have taken their toll, leaving the scars of time.  Foolhardy in double-measure because the lamps (which should have been re-filled and the wicks trimmed an hour past) are burning low and guttering in smoky-gasps.

At the top, he paused.  Once a gaping maw let into a labyrinthine gallery of caves and passages, some natural and some the result of quarrying for stone and ores and the belief that precious stones were buried just another few feet in.  Once, too, these galleries were turned into some semi-habitable dwelling, where the predecessors of the builders of the castle once lived.  Over time the life lived in this dark world, that was both above and below began to pall.  The caves were abandoned and the castle built, eventually encasing the stair.

Well, almost abandoned.  There have always been those who prefer to live apart and many individuals had, over the centuries, taken to losing themselves in the galleries inside the mountain.  Some would simply hide away in some nook, some would extend the diggings, when they thought they had cracked the secret of the mountain and they knew where to dig, where others had given up too soon.  As the years passed, more and more regions became inhospitable, and even the most ascetic of hermits began to find other places to haunt.  Sometime, century past, the King’s brother caused a door to be put in the opening of the cave.  (At this time the top floors of the castle had not yet been completed and even today the plain wooden door bore the marks of wind-burn).  The last vagrants were chased away.  Most of the chambers were abandoned, although guards would still make a periodic sweep through in order to ensure that there no unexpected arrivals.  Two score paces inside the entrance was a very comfortably sized chamber, which was mercifully free of damp and not so far inside the caves that the air became stale and foetid.

The present king had enough children that he didn’t have to worry too much about the youngest, which was just as well: the two furthest from succession were twins.  Coincidentally, the time of their birth had been a time of great turmoil and no-one was entirely sure who, in fact was the eldest.  But as neither was likely to inherit, it did not matter.  Alfher and Beraht were identical and completely different.  Beraht had always been the dreamer, easily distracted by, for example, a flight of birds, but would then spend hours concentrating fully on sketches of those creatures trying to understand how they flew.  Alfher would was more focussed on becoming a knight, but for him this didn’t just mean learning to fight: he studied the sagas and the consulted the bards and wise men and tried to understand how battles had been fought.

And so Alfher, for it was he, paused from the long climb up the stairs.  But only for a few seconds – one of the advantages of youth.  He remembered the first time that he and Beraht had visited this door, when his uncle was still alive and, hermit-like, lived in these caves, emerging infrequently.  Beraht had bethought himself of his Uncle’s dwellings and accoutrements a few seasons past, and seemed to be set on becoming as reclusive as his relative.  Alfher had helped his brother to oil the lock and hinges on the great wooden door, and to clean away the years of neglect in the living quarters themselves, but spent as little time as possible in the dark and forbidding lodgings as he could.

He pushed open the door and called out to his brother, whom he expected to find within the first large space just off the man corridor, a few tens of paces beyond the door.  He did not bother to light a torch from the supply by the door, as he had no intention of going very far into the system.  Instead, he took a deep breath and marched in, calling his brother again: “Beraht! You must come – it is nearly time for the evening meal and Father is expecting us all to be there”.

Beraht looked up as his brother walked in.  “I can’t find the rules!” he wailed.

“Isn’t that why they call it magic? There aren’t any rules.  It just happens.”

“No!  It’s not that simple.  If it just happens, then we couldn’t direct it, we couldn’t produce certain effects –“ Beraht snapped fingers and a small flame appeared at the end of his thumb.  He made the flame dance across his fingertips and then propelled it across the room to light a candle.

“That’s impressive! You’re getting really good at that”.

“Look at this then.”  A second flame appeared and did a more complex dance before, again, flying across the room.  This time though, the flame split into three and lit three different candles.

Together the boys talked of magic, and how it might be used, as they descended the stairs, towards a much cosier, domestic scene.

3 thoughts on “Where are the rules?”