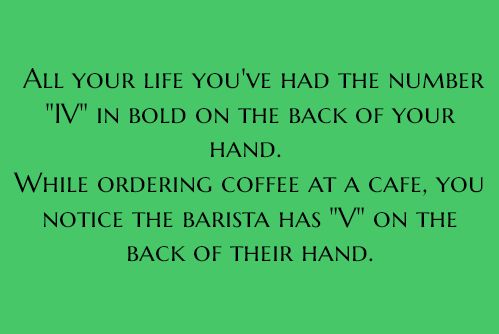 They’d never been able to explain it – your parents that is – why you have the roman numeral IV on the back of your hand. It seems they’d tried everything too, taking you to doctors, psychologists, even a psychic, before eventually realising it was something they’d need to accept if you were going to. They’d done a good job of implementing that decision too, for it’d never bothered you. Sure you’d been a little curious, but that was it.

Until the day you’d spotted him that is. OK, not so much him, but the roman numeral V on the back of his hand. You’d tried to engage with him, but there’d been a queue and both he and the people waiting in line were seriously unhappy; some even started yelling abuse, so you’d taken your coffee over to the corner, and sat there watching him work.

Now the morning rush was over and you were still there. Why hadn’t you rushed back to talk to him? Well, because what on earth were you going to say? “Cute tattoo!” “Is it a tattoo?” “Were you born with it?” Or the question you discover to your surprise is the one you really want to ask “Do you know what it means?”

Problem is, you’re not sure what you’d like the answer to your question to be. If he says “yes” do you want to know? I mean, what if it’s something awful – I dunno, like that’s the order in which the city make sacrifices should one ever be demanded. OK, that’s a tad extreme, but you know what I mean. And if he says “no”, what then? Perhaps he’ll be all “so what?” about it, and you’ll have to slink away feeling like a real dork … and he’s pretty cute, truth be told. But if he’s curious, do you want to join him in some big old quest to find out? I mean, yes, he’s cute ‘n all, but what if it turns out to be dangerous? There’s just too darn many questions – and you don’t have the answers.

In all honesty, you were beginning to wish you had some sort of magic wand and you could chose to go back to your days of ignorant bliss.