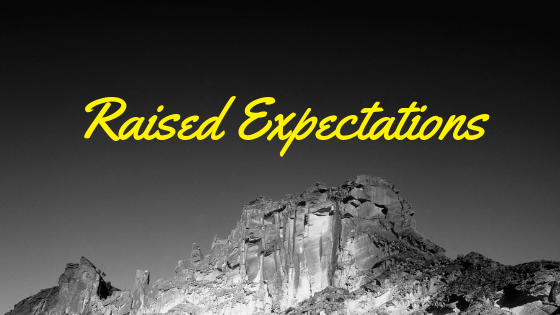 When something is hyped, is that the kiss of death for you?

Something happened recently which made me ponder a while on this subject. For one reason or another, more time than usual has been spent chez nous, resulting in much catching up on TV box sets, a fair bit of reading, a whole slew of YouTubes and the odd film. One of those films has caused many a friend to spout superlatives so, when Himself unveiled it, my mood took a little lift. Sadly, that didn’t last long. I’ll return later to the who and the why, but first I’d like to take a look at the subject of raised expectations as a whole.

Where books are concerned, I feel I’m generally pretty good at managing my expectations, because I’m well used to not liking the same books as most of the people I know. That said, I have to admit having recently written a couple of reviews where I’ve admitted being disappointed … following high expectations. Two which fell into this category – where I was the only guilty party in the expectation raising – were Murakami’s Colorless Tsukuru Tazaki and His Years of Pilgrimage & C J Samson’s Tombland. I’m a big fan of Murakami and just love his crazy style and I’ve found every one of Samson’s Shardlake books to date a real treat. Yet both, somehow, lacked. Could it be that – in both cases – I’d spent too much time in anticipation, something neither could really live up to?

Live events are another area where there can be hype and expectations. Not a fan of football, I’ve nevertheless had excellent experiences on the only occasions I’ve attended live games. Manchester United featured in both, so you could posit that the play wasn’t at all shabby, or was it that I found much to praise about the experience because I went expecting so little?

Therefore, I have to ask, is disappointment a foregone conclusion when expectations are raised? Not always it seems. I caught up with modern classics All Quiet on the Western Front and Things Fall Apart absolutely eons after everyone else.  Yet both totally & utterly blew me away.

On then to The Greatest Showman – where Hugh Jackman plays the great P T Barnum. A successful stage musical, now transferred to celluloid, this is the film which trigged my train of thought. Multiple friends professed their love for it, posted about attending the cinema multiple times to watch it, to have purchased the soundtrack for repeated listening … yet I found it entirely forgettable. And I consider myself a fan of musicals.

So, what was wrong with it? Leaving aside the fact the film did nothing to develop the stage show visually (by which I mean that the scenes still looked like theatre sets) the songs were unremarkable, as were the singers, and the choreography was simply frantic. Worse, the story was pure hokum. Whilst I don’t object to some bending of the truth, this played fast & loose with the true story, was utterly laden with trite tropes and filled with plot holes. I’m sure the aim was for it to be fluffy, feel-good, family entertainment – so perhaps as a 60-something wannabe writer, I’m not the target audience.

Still, I’m glad I’ve seen it. It reminded me that taste is very personal and to trust reviews only from those I know share mine. I’ve given considerable thought to whether I’d have enjoyed it without having my expectations raised … and the answer is still no. But it would probably be true to say that I wouldn’t have felt so deeply disappointed.